Transwomen Gap in a Formal Work Attainment as a Constrain of Indonesia's SDGS Accomplishment. An Executive Summary for a Panel of Rhethoric Gender in Indonesia 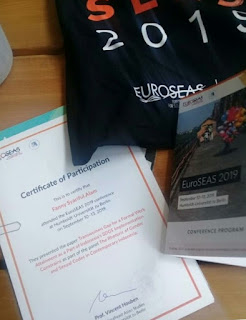 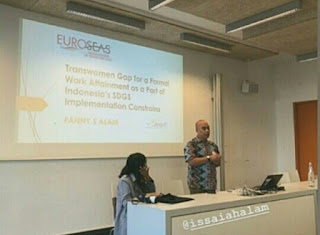 Thank you for your time and attention to our panel. Thank the Euroseas Committee who have already accepted my paper. Therefore, I am open for any objective and constructive criticism both from you and the audience. I would like to introduce myself, my name is Fanny S Alam, working as City Coordinator in Bandung School of Peace which is in line with School of Peace Indonesia National. We organize weekly programs to introduce human rights and social issues for the youth in the city. We set them thematically, starting from religions and beliefs, gender diversity and sexuality, and other minorities as well as politics and environment in purpose to develop the youth's emphaty and willingness to engage with minorities in the city. Discussing about minorities, one of which becomes the highlight in my paper, is about transwomen and their issues, mostly about how to attain formal work. It is definitely a hard issue to talk, mostly due to stigma and discrimination not only from societies but also from the government apparatus. Attaining formal work is important for anybody to secure their daily needs as well as their future saving. It is very common to see people search for a job. It is the world with competition, though. However, when coming to transwomen for their work, it is barely seen that they could work openly in formal sectors. As known that Indonesia has committed to signing platform of SDGs which has inclusion principles. It means this platform secures no one left behind, ensuring that all development interests must cover anyone without exceptions (stated by U.N. statement). It includes vulnerable or marginalized groups including LGBTI. The country has ratified U.N. covenant about human rights to Law of Republic of Indonesia no 12/2005 with Act 1 securing Indonesia human rights regardless the positions of sex, ethnicity, race, religion, and sexual orientation. However, its implementation faces some issues, particularly about transwomen positions. The norms of religion and heteronormative values are adopted in this country, therefore it makes their position harder to be recognized officially. From one of interview sessions with a transwomen activist from Srikandi Pasundan, she underlines how the societies and government apparatus label them social diseases, being arrested by public orders enforcers on the streets to be put in a short term day rehabilitation. Most of their transwomen partners work in informal sectors, such as waitress, spa therapist, hairstylist, and cook in several caterings. On the other side, another transwoman, name Abi says that she used to apply for some formal jobs. She is a university graduate in communication major and she faces some uncomfortable situations mainly in final interviews after revealing her true gender identity and soon after that most of the companies she applied never contact her. The above experiences leave us some questions, particularly about how the country shows their partiality to support anyone as they ratified through the national law. Why it seems difficult for them to appreciate and to recognize transwomen position as humans the same as others. If the government do not respect their rights, one of which is to secure their right for attaining formal work, then their commitment in SDGs is questionable and becomes another constrain because it seems to be reluctant for the country to stand for their rights fully. It might be challenging for the Indonesian government to be open minded to recognize their existence, while it is certain that the societies here will do so. With the rise of more conservatism in religion in Indonesia, it is still a long way to go for transwomen to be secured for their rights, especially for their formal work attainment. They are still struggling while the government has already been attached with some certain human rights ratifications which also address their rights in this country.
di Oktober 03, 2019